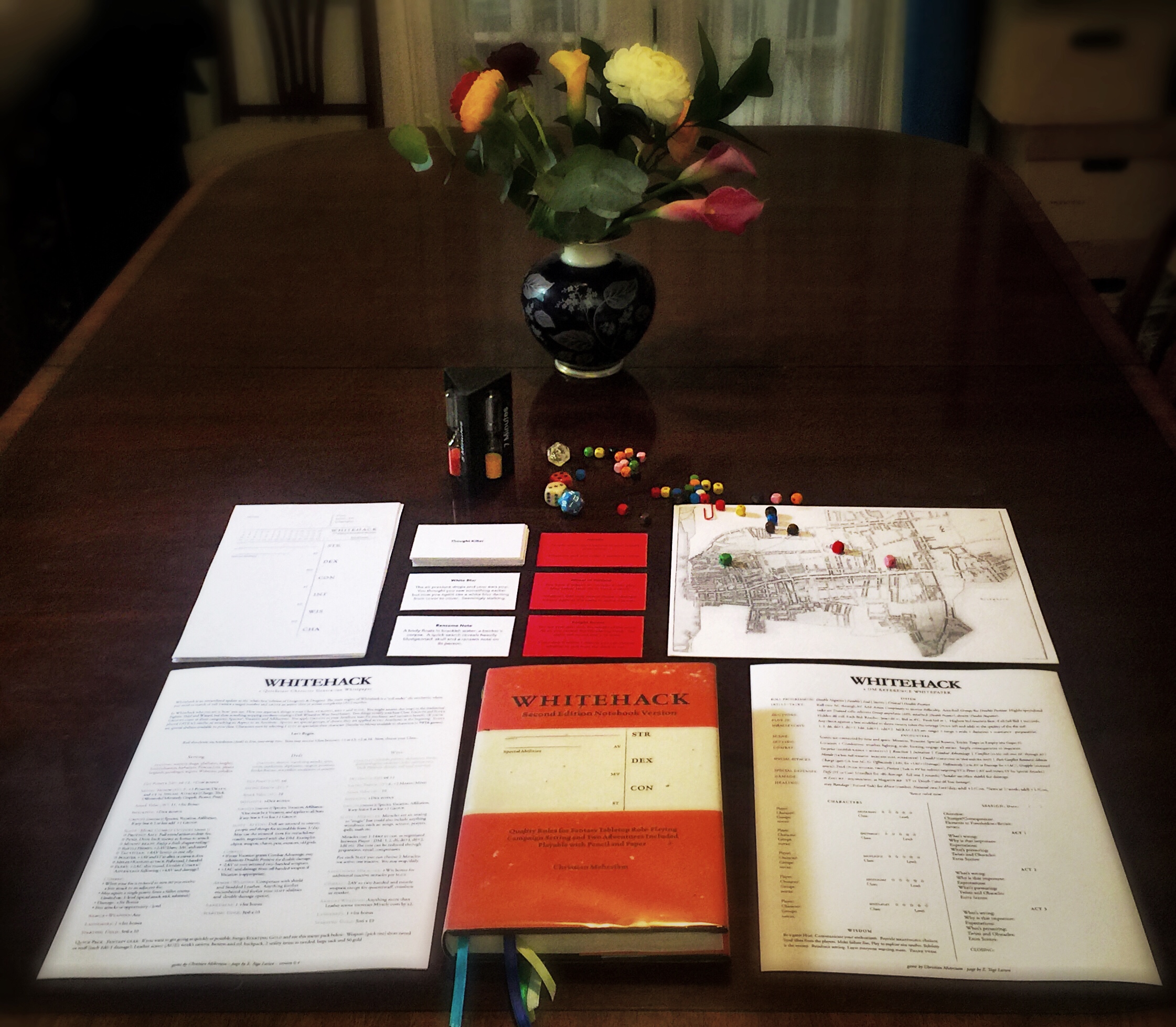 RPG Roulette is an attempt to address and resolve a bunch of issues that are inherent in tabletop rpg gaming:

• Elevating everyone at the table as responsible for the “fun”.

Living in NYC, it became obvious pretty quickly that people move in and out of this metropolis at an alarming rate.  Coupled with families and life issues, it’s difficult to enjoy real life gaming with regularity let alone breaking out of the mold of familiarity to try new things with new people. Gamers are, by and large, a comfortable lot having long ago decided what type of “fun” they like and how they like it.  That sort of staid precept isn’t conducive promoting and endorsing the widely enjoyable plethora of gaming that is available to us these days.  The discussion of trying to break out of those norms often founders on hemming and hawing about “who does the thing”, “where it gets done” and the system that it gets done in.  It gets bogged down in a swarm of indecision and then either nothing results or everything defaults to what was done before comfortably.  I can’t tell you how many times I’ve seen this pattern repeat.

To address a bunch of these issues, I came up with the idea for RPG Roulette.  A play-date that asks everyone interested to commit to playing on a date; once the table is filled up with rsvps, two names are drawn from the attendees and each of those people are responsible for running a convention length one-shot game (3-4hour slot), for what would be a two-slot game day.  Those two people are immediately notified so that they have enough time to prepare material to run.  The other participants/players are notified only that they are players and that they are required to show up on the agreed date and play two games.  They are not informed of the other players, the selected referees or the games they will be playing.  The day itself is turned into a game.  All attendees are enjoined in a wager that they will be ‘participating’ and that they may be called on to lead an time block.

The double-blind is set up so that there is no pre-judging or pre-playing of personalities or systems.  There aren’t expectations about what’s going to be done for you.  Everyone is showing up on that date to contribute to having fun with a group of people.

“But do I have to ‘run a game?'” Is perhaps the question most asked by either novices or habitual ‘players’.  In Season 2, I invented the ‘Catbird Seat’ which is a VIP class of ticket that allows someone to buy-in to the event and bypass the roulette.  Because, it was important to acknowledge that some people may want to participate but not have time to prepare or that some folks might want to introduce somebody to the concept with a firewall of opting out.  The concept of RPGR is that everyone is participating.  The Catbird Seat attendee is participating by either bringing some refreshments or buying the pizza.  That person is a different type of contributor.  Check out “Catbird Seat” for additional information.

We sit down, have some fun, kick the tires on a variety of systems and ideas and help each other with the rules.  It’s not the easiest elevator pitch but so far the gaming seems to be working.  Commit to play.  Wager your responsibility, but ultimately we are all responsible.  Pull the trigger.  RPG Roulette.

RPG Roulette… good old-fashioned anonymous fun.  You can trust us.  Most of us.  Well, not Dave. (Dave not pictured here.  …typical Dave.  See?)