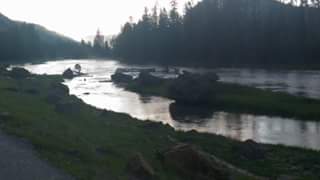 Citing irreconcilable differences, Laevan have decided to take a break.  It is said that the separation is amicable but custody of dotwatchers has yet to be resolved.  Evan has moved out.  We attempted to reach Lael for comment, but obviously distraught, she turned off her tracker.

I wrote the following last night before I went to bed, when all was still right in the world…  “So here’s the thing.  I think Evan Deutsch could win this.  He and his bike-wife rested very little the other night which helps to explain why they leapt up towards Streich.  Generally speaking, Streich sleeps 2.5 hours longer than Deutsch does but rides 2mph faster.  Or “did”.  Did for the first half.  Does Streich have a weak chin on flats?  Maybe not.  Asking Deutsch to ride faster might sound a cruel entreaty.  But it’s clear that he’s capable of sleeping less than is his want.”

This morning starts with a 105 mile gulf between Streich and Deutsch.  Today’s the day if Evan’s going to do this.  He’s going to have to take Streich out of his comfort zone. For the better part of the day Streich held his own.  Tick. Tock. Doc.

Newton Bike Shop, one of many of the unofficial supporters of the race, should be in triage mode from this point forward as riders from East and West begin to descend on them in all shapes and sizes.  Nearly everyone is expected to stop in an avail themselves of the amenities.  and profanities. Both of which are freely offered.

Warm and wet, Steffen Streich rolled in to the Newton Bike Shop just shy of 4pm (CST?) at roughly the same time on the clock as Jesse Carlsson’s last year and ten hours after Mike Hall’s time from the TABR1.  Steffen is fit and tan with a huge smile and very likable.  He immediately made mention of wanting to get his Garmin charged (He carries a battery pack under the top tube but is it charged from a hub?)  and made some comments about not liking riding in the cold.  We were lucky to get an overview of his bike and kit thanks to the Newton live stream:  his gloves were some bulky Northface shells.  Schwalbe Pro 1 tubeless tires (loves them for road; but definitely not mountain bike.)  He’s been riding in his training shoes and there’s a screw protruding into his right heel causing quite a bit of discomfort.  Rear light on left stay.  The secret package below the water bottles in the main triangle contained a spare tube and chain.  Q rings.  Something taped along the right rear stay.  Selle Italia saddle.  Scott tank bag. Micro-pump attached to the frame next to the rear water bottle.  His primary kit seems to consist of 1 jersey, a base layer, and two pairs of shorts.  He complained about the replacement Hutchinson tire that he’s been riding on.

Asked about the ride so far, Streich said, “Tough. Hot. A lot of wind. A lot of climbs.”  He’s getting into a rhythm and feels stronger past the Rockies.  I asked online if he was going to stick to the same plan he’s been using for the first half as he goes into the second.  He responded, “No reason to change because it works.”

A few minutes later, Streich got a bit paranoid after checking the tracker and seeing Deutsch at 70 miles out.  He is indeed changing his plan and is now only going to rest for a few hours before heading out. He wants to keep a 2 hour gap between him and Evan.  Most importantly, He wants to be out of there before Evan rolls in.

Generally speaking, the rest of the Top 10 are largely in the same positions they were at the start of the day.  That is said with the widely reported understanding that Lael’s mileage is suffering from Spot tracker issues and not reporting correctly, because it shows her having dropped behind Sarah Hammond and Kai Edel on the day.  Markku Leppala appears to be having a bad day and has slipped a few place.  Nothing further on that yet.

The one man carnival that is Lee Fancourt was set back by some gear failure yesterday, Lee salvaged what he could from his broken seat bag.  Donned what he wanted and left the rest of it on the side of the road.  I’m sure there’ll be a video about it soon.  His predatorial yoyo-ing of the Leader Board began anew.  This time with his spot tracker strapped to his helmet.  Until late afternoon, when he snapped his rear derailleur outside Kremmling, Co.  Can he rebound from this new madness? Or is this the final chapter?

QUOTE OF THE DAY: “I’m an old guy, i need rest.” – Steffen Streich on his sleeping program.

SAD NEWS: Thoudam Singh has withdrawn from the race due to ongoing gastro issues.

GOOD NEWS: The Undeniable Jason Marshall was clipped by a vehicle last night in a high speed hit and run.  A few hours of soaking his body in ibuprofen and he’s dusted himself off, removed himself from the scratched list and is back on the road.  Bad Ass.

Is that two people (also Laura Scott) now that have been hit in this year’s race or are there more?  Currently, your odds of being hit by a car in TABR are 1:33.  If you broaden that to include all assault, it comes down to 1:22 with Brian Steele’s bottle incident; and 1:16 if we include bike theft.  To say nothing of the numerous ridiculously close calls ha by all.  Ride safely, Trammies.

INCIDENTAL: Rapha has somehow “coincidentally” entered the bike-packing market today with partnered Apidura seat and handlebar bags.  No mention of weight currently.  And the stitched-on fancy appliqué seems to have violated the waterproofing, so that they offer you should add an drybag to their pack for additional insurance.  Seems like a missed opportunity.   I should note that this cyclist and author is available for further review and possible retractions should Rapha North America wish to contact me.

PREDICTIONS: Never too soon to put your foot in your mouth.  I’m calling it for Evan Deutsch in a down to the wire death-match with Steffen Streich.  He’ll take victory at Weds 22nd, Day 19 at 10am EST. Of course, I may be wildly wrong about this.  It would require a Herculean change in the patterns that are already established.  But then, I just guessed the arrival of Steffen to the Newton Bike shop down to the minute.  Guess i won something.  So, I’m a Wizard!  You?